Munich/Germany – Bratislava/Slovakia – 26 November 2020 – IFC Media, a leader in the distribution of TV channels and content in the Czech and Slovak markets, and Munich-based Your Family Entertainment AG (YFE) team up to relaunch the first children and family TV channel RiK in Slovakia.

The international expansion of YFE’s family of RIC/RiK TV channels continues: After launching its international network in 2019, YFE and IFC Media jointly announced today the relaunch of RiK, Slovakia´s first TV channel for kids and families in Slovak language. The new linear Pay TV channel RiK is aimed at children and families and will broadcast award winning films and series on a 24h basis.

RiK the Raven, born in Ravensburg, Germany, is not only an iconic animated series but also the broadcaster’s hilarious mascot for the family of TV networks internationally. The relaunch of RiK in Slovakia is the next step in the expansion of channels after Germany/Austria/Switzerland and the launch of RiC International in cooperation with A1 Telekom Austria in 2019.

RiK’s launch in Slovakia comes at the right time to support kids in the current pandemic as lockdowns and social distancing weigh on children in particular. RiK’s programmes are designed to be entertaining and fun while avoiding violence and promoting social values. Parents can thus rely on RiK to provide the right kind of entertainment for their loved ones in difficult times. Your Family Enertainment AG has just been rated “Very Sustainable” by AssetImpact, a German rating agency for ESG compliant companies. Environmental, social and governance (ESG) criteria are a set of standards for a company’s operations that socially conscious investors use to screen potential investments.

Bernd Wendeln, COO and Board Member of YFE, is delighted to announce the RiK channel launch: “Our Group strives to expand internationally by teaming up with great partners. We are thus excited to join forces with IFC Media and are looking forward to a long-term partnership. RiK comes at the right time for children and to entertain the whole family in Slovakia. The launch is yet another excellent example of YFE’s ability to expand and build its business internationally.“ 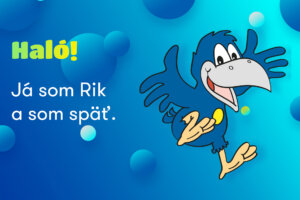 About Your Family Entertainment AG

Your Family Entertainment AG („YFE“) (WKN [German security code number]: A161N1, ISIN: DE000A161N14, Abbreviation: RTV) with headquarters in Munich/Germany is a producer and distributor of high-quality children and family programs with one of the largest broadcaster-independent libraries in Europe. Its stock includes well-known series such as “Enid Blyton”, “Fix & Foxi” and “Altair”. YFE additionally operates the award-winning Pay-TV kids channel „Fix&Foxi“, which is available in the GAS-Region (German), in Africa and Middle East (Arabic and English). The Company also established free-to-air kids channel “RiC” with a current coverage of 34 Mio. households in the GAS region. In addition, YFE operates several mobile TV streams and digital channels worldwide

IFC Media (IFC) is a major commercial broadcast entertainment and media company in Slovakia and in the Czech Republic. The group’s operations encompass entertainment production, content and Pay TV distribution, television broadcasting and satellite tv production. The Company has been operating in the region since 2009.

Related
Ginx Esports TV has entered into a partnership with IFC Media
Arena Sport has earned rights to broadcast of Formula F.
Travelxp HD started on Skylink platform
The Playboy TV has been added to the IFC Media portfolio
Contact us